The cart is empty

I never received an e-mail with links to download my songs...

The email notification of your download occurs once your order has been confirmed--which means that you completed all steps for check-out and the payment processor of choice has returned a message to KimKraut.com that your purchase was approved--and that there are no email issues between our server and the email account listed in your account information. 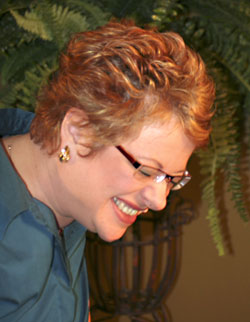 Kim began directing in the 1980's when she directed Northland Chorus in Kansas City.  Soon after she decided to continue her education and began singing professionally. When she finally returned to directing it was in Mobile, Alabama where she directed Sound of the Bay Chorus.  She then returned to Kansas City to co-direct the Kansas City Chorus but finally found her home directing RiverSong in St Joseph, Missouri.  She now travels the world and is no longer directing, but is much sought after for coaching.

Kim has also sung in numerous quartets at the international level since 1981 - Chord-On-Blues, Blue Revue, and PRIMO!.  When she's not busy singing and teaching at home she teaches and coaches choruses and quartets around the world!

Kim received her formal training at the University of Missouri at Kansas City's Conservatory of Music. She graduated with degrees in Music Education and Secondary Biology Education. She then began a Master's Program in Vocal Performance but became so busy singing opera professionally that she hasn't returned to her Master's degree program. Kim sang opera professionally for twelve years and continues to sing in the classical community today.

Welcome to the New Online Store.

All the songs you see here are available for purchase on a CD or for download from this site.   Registration for a free account is required at checkout.  After you register & complete the checkout process, you will receive an email with instructions for downloading the song(s) or with an estimated ship date for the CD(s).  Happy Browsing!!